In Holly class, Matilda, aged six, calls the register. “Ciao, Tyler,” she says. “Presente,” he replies. “Ciao, Arthur,” she says next. “Ciao, Maestra Matilda,” he says. The class collapses into giggles: Matilda is taking the register as part of today’s Italian lesson. Her teacher, Stefania Cellini, helps the children count aloud to check everyone is there. Even though these year 1 pupils are only five or six, they easily count to 28 in Italian. “You are all bravissimi,” Cellini says.

If there’s sports day, Sats or a school trip, languages are the first thing to go

This language lesson is not a one‑off. Here at John Rankin infant and junior schools, in Newbury, Berkshire, all pupils receive one hour’s Italian teaching a week, starting in year 1, funded not by the UK, but by the Italian government.

Today, Cellini – the pupils call her Maestra Stefania – is teaching Holly class the names of common objects used in the classroom. She calls children to come to the front in turn to pick out objects from her pencil case without looking. “Apri l’astuccio e cerca la matita,” she tells Joshie. He rummages about and pulls out a pencil. The class applaud and Joshie smiles proudly.

Cellini is one of 70 Italian teachers paid by the Italian government to work in UK schools and promote the language. The scheme provides 112 primaries and 27 secondaries with an Italian teacher – for free.

Sadly, this level of language tuition is rare. Since 2014 it has been compulsory for all schools to teach a modern or ancient foreign language to children aged seven to 11. Yet progress has been patchy, at best. Last year’s Language Trends report by the British Council found that “languages remain a marginal subject which many primary schools find challenging to deliver alongside many other competing demands”. Florence Myles, chair of the Research in Primary Languages network, agrees. “The vast majority of schools are falling far short and if there’s sports day, Sats or a school trip, the first thing to go is languages.” 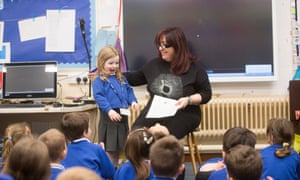 Without this help from foreign governments, some primaries would be unable to afford specialist language teaching. Reports last month highlighted that 91% of schools have had a shortfall in funding over the past three years and some are having to use teaching staff to do the cleaning, delay turning on the heating or even close early to save money.

The Italian teachers are native speakers with teaching qualifications, many already live in the UK and some, such as Cellini, have moved to the UK to take up their posts. “These teachers come here because they are passionate about their job,” says Mara Luongo, director of the education department at the Italian consulate in London. “They come with a mission to help students learn to love Italian.” Marco Villani, the Italian consul general, says: “Our objective is to enable pupils to learn and appreciate the beauty of the Italian language, as well as the richness of its historical and cultural heritage.”

In the UK, around 16,500 British primary school pupils benefit from the scheme. All receive at least one hour of Italian a week. And the teaching goes beyond the compulsory seven-to-11 age group to include younger pupils.

The Italian scheme is one of a number provided by overseas governments to support UK schools to teach their language. The Portuguese embassy pays for full-time Portuguese language teachers, but on a much smaller scale, working in just three primaries and 10 secondary schools in England and the Channel Islands. It also finances after-school Portuguese in other schools. The Spanish embassy’s education office provides UK primary schools with free materials and resources, teacher training and advice. And the Spanish visiting teachers’ programme is piloting a scheme to place specialist Spanish teachers at UK primaries, although individual schools will have to pay the teacher’s salary.

Secret Teacher: Class, I wish I'd told you the truth about my mental health 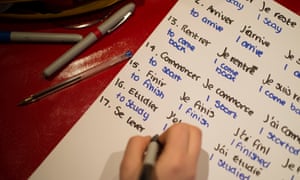 In 2018 the proportion of children taking a language at GCSE was 46%. Photograph: Photofusion/UIG via Getty Images

The institute also works closely with a smaller number of schools. At Leighton academy primary school in Crewe, German is embedded throughout the curriculum. “It’s not just the German lessons,” says Nigel Pearson, the school’s German teacher. All pupils from nursery to year 6 receive an hour of German a week. The ties to the Goethe-Institut also provide Leighton academy with German interns. These trainee teachers from across Germany come to the school to do a placement. “It means we can offer differentiated language teaching, with breakout sessions for the most able and those who find it hardest,” says Pearson.

Everyone welcome: inside the schools that haven’t expelled a child since 2013

Unlike the Italian scheme, the Goethe-Institut does not pay the salaries of German teachers. “It is important to invest in languages from an early age,” says Joanna Young, principal at Leighton academy. “I have cut back in other areas because I feel so passionately about the importance of foreign languages.” But she worries about the future. “I am being hit in the next few years by the local funding formula. Unless things change – I am praying that happens – whether we can continue to maintain German from nursery through to year 6 remains to be seen.”

The government has set a target of 90% of pupils in English schools taking a language GCSE by 2025, but progress has been slow. Numbers sitting an A-level in a modern foreign language have slumped, and in March the all-party parliamentary group on modern languages published a report with proposals on how to turn things around, including measures to improve language provision in primary schools. The report calls for compulsory language teaching from the age of five, a wider range of languages taught and for all schools to have a language assistant.

‘Many of our children don’t get presents’: schools open over Christmas for families with nothing

Schools minister Nick Gibb says: “Giving more young people the chance to learn foreign languages helps broaden their horizons and will ensure this country remains an outward-looking, global nation.” Since 2010 the proportion of children taking a language at GCSE has risen from 40% to 46% in 2018, he says. “We are determined to see this rise further, and ensuring pupils become interested in languages from primary school will help achieve that.”

Back in Newbury, pupils in the year 3 Beech class clamour to say how much they love Italian. “It’s my second best lesson after PE,” says Jude, seven. “I’d like to be able to speak every word [in Italian],” says Amelia.

“When the students write their comments on their end-of-year reports, nearly all of them say the thing they enjoy the most is Italian,” says Felix Rayner, executive head of John Rankin schools. “It’s made our children passionate about languages. This passion gives them confidence and they are more likely to want to study languages in the future, and means they are open to embracing different cultures.”