Tim Jones had just landed a job as an RE teacher at a secondary school in Greenwich when he stumbled on Extinction Rebellion. Not long before, he had been seeing a counsellor for feelings of helplessness and depression about the ecosystem and how schools fed into the planet’s problems. “At that point I was at my most depressed,” he says. “It was eco-anxiety. I’d started a new job at a good school with good people, but the system was just heartbreaking. I felt completely disaffected.”

Then, in October last year, he went to a training day with Extinction Rebellion (XR), the environmental activist group, where he and other teachers learned about legal procedures and how to be arrested safely. Jones, who is 36, began to panic. “I thought, ‘I’m a teacher and now I’ve joined an organisation where people are going to get arrested. Will I be fired?’”

This was followed by what he calls a “life-changing moment”. “The consequences for me of losing my job seemed so insignificant compared with the consequences of inaction on climate change.”

The climate crisis is the most urgent threat of our time. Help us fight it | Katharine Viner

In November last year Jones took part in “civil disobedience”, blocking roads in London. Three months later he organised a protest outside the Department for Education (DfE) with other teachers to spray paint “teach the truth” on its walls. The feelings of helplessness receded. By June, he had left teaching and moved out of his flat.

Relationships Are Important. How Do We Build Them Effectively With Kids?

Jones recalls a conversation about his potential arrest with a senior leader at his school, who likened Jones’s concern about the climate crisis to a “religious conviction”. Jones replied, “the science is not controversial” but was told: “that’s not how everyone sees it”.

He was, however, assured he would not be fired if he were arrested, but it wasn’t enough. “When I quit, I wrote a long, heartfelt letter, explaining in detail the science in case they didn’t know.” It had taken just eight months to move from full-time teacher to unpaid volunteer.

Schools, which often attract conscientious people wanting to bring about societal change, are now being challenged by some teachers – and students – to set an example over the climate emergency.

Should children be allowed time off school to strike?

In addition to old, energy-inefficient school buildings and food waste, Jones says, the lack of progress on social mobility is a factor in the climate crisis. Poorer pupils are almost twice as likely to fail key GCSEs, and almost half as likely to get top grades, compared with their wealthier peers. Jones says this perpetuates an unfair system that “hammers individualism and competition into pupils” – key ingredients for lack of action on climate change.

Jones is not alone. Tom Baxter*, 34, a primary schoolteacher in Sussex, has also handed in his notice. Last month he was arrested by police during an Extinction Rebellion protest and released under investigation. “At first my headteacher was quite supportive, but when I mentioned I planned to be arrested, she was shocked and didn’t understand my motivation. She advised I didn’t do that.”

Baxter plans to find supply teaching work and buy a plot of land. “If I get a criminal record and a school won’t take me, that will be my filter system for only working in good schools.”

Louise Stafford*, a history teacher at an Exeter secondary school, says she is on “very difficult terms” with her head since being charged with blocking a public highway in April. She met Jones and Baxter at the Extinction Rebellion teacher protest outside the DfE in February. Teachers have now formed a group, XR Educators, which has about 240 active members who share resources and support one another. 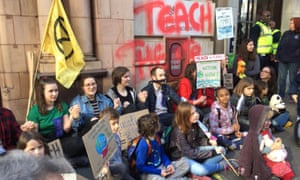 The Extinction Rebellion protest outside the Department for Education in February. Photograph: Sophie May

The network is much needed, says Stafford. “My headteacher placed the teacher standards in front of me and pretty much said I was a bad role model. She has also suggested I’m not following the fundamental British values. It’s really stressful.”

The teacher standards require “consistently high standards of personal and professional conduct” and “that personal beliefs are not expressed in ways which … might lead [pupils] to break the law”. Like Jones and Baxter, Stafford says schools are too focused on data, and measures heads have taken to tackle the climate crisis, such as appointing “climate change champions”, are just to appease parents.

Finn Woodhill, 32, a geography teacher in west London, is taking things further and is applying to start a sixth-form free school next year “taught through the climate and ecological lens”. Woodhill decided to leave his job after his proposals that his school declare a climate emergency fell on deaf ears. The free school that he wants to establish in Manchester, Bristol or Birmingham would accept 45 pupils and offer seven relevant A-levels. To balance costs, it would be teacher-run and without a principal.

Buying College Essays Is Now Easier Than Ever. But Buyer Beware

So what can schools do to help, and avoid being seen as part of the problem? Some are making sustainability a curriculum theme. Others are taking steps such as installing solar panels – for example, Oasis Community Learning academy trust is installing 14 solar panels across its schools.

Many more could soon be forced to address the climate issue. Of 157 local authorities contacted by the Guardian, 55 replied within the timeframe, and 85% of those had declared a climate emergency, with the majority (62%) aiming to be carbon neutral by 2030. Portsmouth, Cornwall, Wirral, Birmingham and Northumberland councils are encouraging their schools to declare a climate emergency, too, and at least three have publicly done so since July – Energy Coast UTC in Cumbria, The Chase in Worcester and Morpeth school in north-east London. 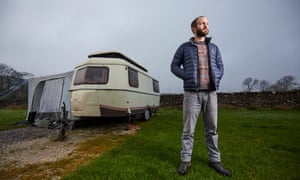 Tim Jones is living in a caravan in a Derbyshire field. Photograph: Christopher Thomond/The Guardian

To add to the pressure on heads, Jones says, XR Educators is planning “acts of educational disobedience” in the spring. Schools could face mass walkouts as the group seeks to mobilise staff and pupils across the country.

Its leader, Joe Brindle, a year 13 student at Devizes school in Wiltshire, is in talks with the chief executive of his academy trust, the White Horse Federation, about declaring a climate emergency across its 32 schools. Noga Levy-Rapoport, another member of the group, said pupils have staged lunch “sit-ins” or “walk-ins” when forbidden to strike.

Jones says he has a message for former colleagues: “Teachers should really consider leaving mainstream education. They should be clear it’s because the educational system not only fails to teach about the ecological emergency, but perpetuates an unfair system that is part of the problem.”

* Some teachers’ names have been changed