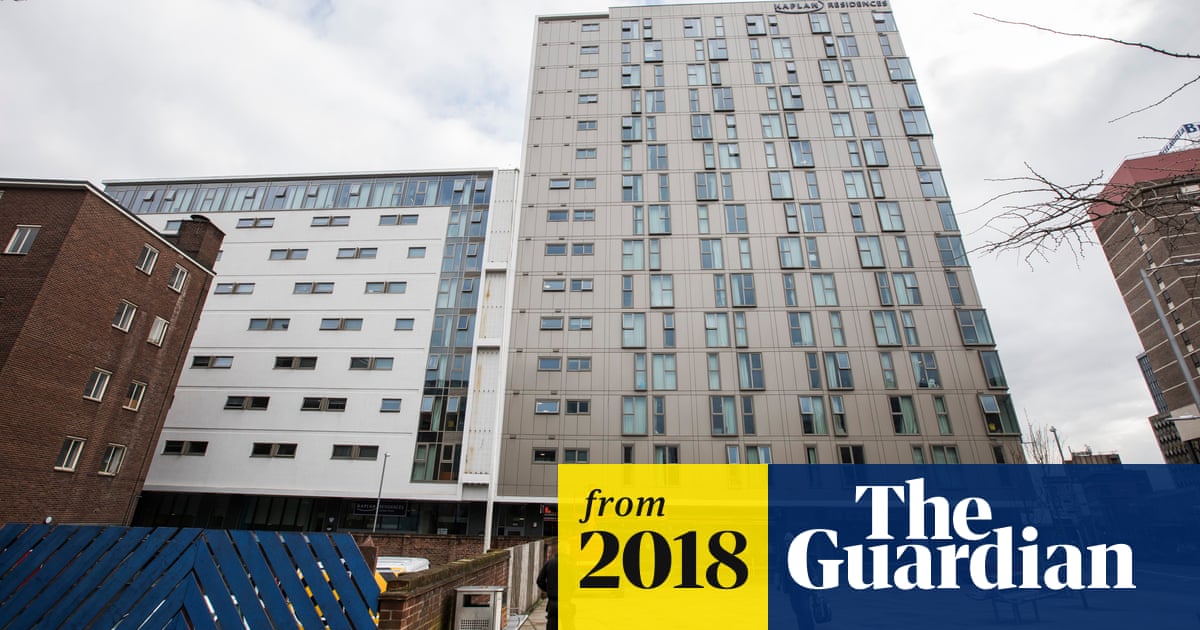 Thousands of students arriving at university for freshers’ week face sleeping in high-rise accommodation wrapped in combustible Grenfell-style cladding, the government has admitted.

Fifty-four privately owned student residential towers in England remain clad in aluminium composite material similar to that which helped spread the fire at Grenfell Tower 15 months ago, claiming 72 lives. The extent of the problem was revealed in figures released on Thursday by the Ministry of Housing, Communities and Local Government.

Only eight of the 62 student towers rising over 18 metres and using material that officials said breached building regulations have so far been completely fixed, according to the data. Remediation plans were unclear for 23 of the towers, officials said.

Hundreds of students live in each tower, many of which were built with funding from international investors.

The National Union of Students has said the buildings should not be used until they have been repaired and called for a full list of the affected premises to be published.

Up to 3.6 million Students Should be Labeled Gifted, But Aren’t

The government has refused to make public which towers have been wrapped in the cladding. It has declined a request by the Guardian under the Freedom of Information Act to reveal the whereabouts of the 468 high-rise buildings in England with failed cladding.

It admitted there was “public interest in transparency with respect to buildings’ safety” but said disclosing the information could endanger the mental and physical health of people living in the buildings and could compromise their safety. It would only say roughly how many affected buildings there were in each local authority area.

The officials said residents in affected buildings had been notified and so the public interest in occupiers being made aware had been addressed. Some councils have taken a different position and published the names and addresses of affected buildings. Observers have argued that visitors to the buildings, including delivery couriers and workmen, also had a right to know.

The Office for Students called for urgent checks of the halls of residence. “We would hope that the local fire authority and the Health and Safety Executive checks these blocks urgently to reassure students of their safety,” said the the higher education regulator’s chief executive, Nicola Dandridge.

In March, students living in an affected block in Nottingham told the Guardian they did not know the panels on the outside of their block were flammable.

Elizabeth Hess, a spokesperson for Kaplan, which operates the 14-storey Global Point student block in Nottingham, said it emailed new residents explaining what the building was clad with and that it was to be removed. Sprinklers had already been installed, she added.

The government has also revealed for the first time that 28 high-rise hotels were among 295 private sector buildings that would have to remove the cladding, but again it would not say where they were. None of the affected hotels has had the cladding removed or have even started remediation works, according to the figures.

Of 205 blocks of private flats across England with combustible cladding, only two have been completely fixed. Remediation plans were unclear in 86 cases.

Ministers have warned private building owners they could face government intervention if they do not act. So far, Barratt Homes, Legal and General, Taylor Wimpey and Mace have agreed they would pay to remove and replace cladding on affected buildings. Other developers were contesting property tribunal claims from leaseholders who have faced bills of tens of thousands of pounds each to fix the panels.

Of 159 social housing blocks that have cladding that failed fire tests in the wake of the Grenfell disaster, 15% have been fixed and 62% have repairs under way. There were no plans for the remaining 38 buildings.

A spokesman for the housing ministry said: “There is nothing more important than ensuring people are safe. Details of every building with unsafe ACM [aluminium composite material] cladding are given to the relevant local authority and fire and rescue service so that checks and visits can be undertaken to ensure residents are safe. Building owners are responsible for ensuring residents are properly made aware of fire safety procedures.”