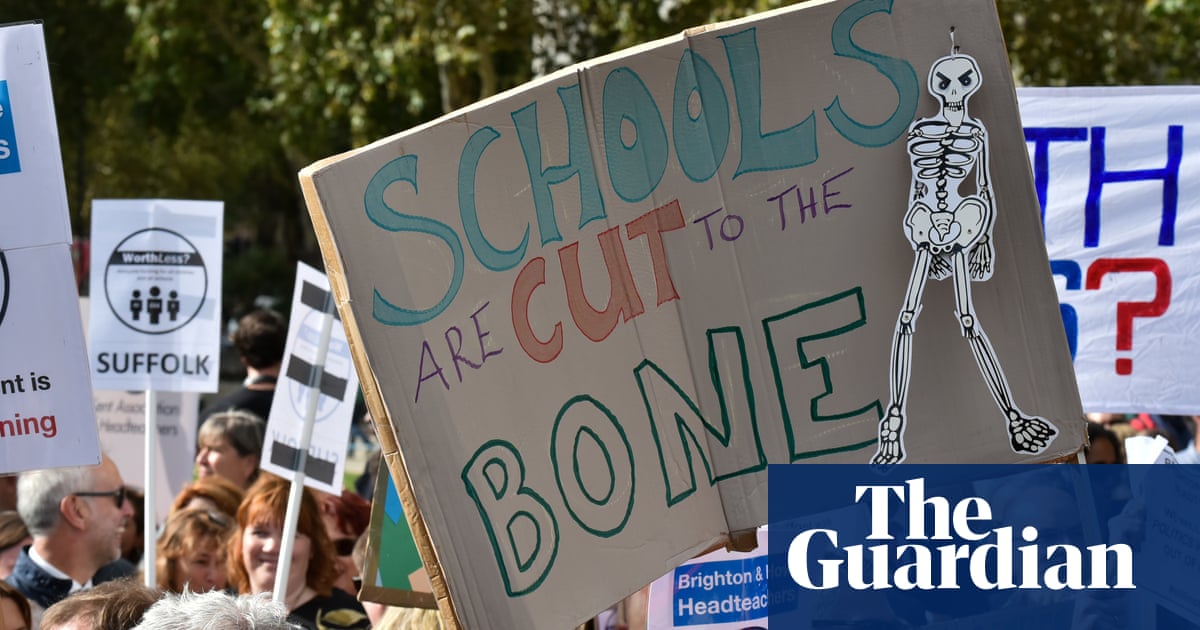 There has been a £5.4bn shortfall in school funding in England over the past three years, according to an analysis of official figures by unions which says the deficit is worse than previously estimated.

The School Cuts coalition of unions representing teachers and school support staff claims the latest analysis represents the most comprehensive examination of school funding to date.

It says the shortfall affects 91% of schools across England and the overall situation has become so bad that even low-paid support staff are regularly dipping into their own pockets so children can have food, stationery and sanitary products. As a result there are fewer support staff to help children with mental health problems, class sizes are rising and the range of subjects schools can offer is shrinking.

The school funding issue has climbed rapidly up the national agenda in recent months, with headteachers becoming increasingly outspoken about their struggle to make ends meet as costs rise and funding fails to keep pace.

Should the School Day Match the Work Day? Teachers Weigh In

Both the School Cuts coalition, which runs a website where parents can look up the impact of the funding crisis on their school, and the Department for Education (DfE) have been criticised by Sir David Norgrove, chair of the UK Statistics Authority, over potentially “misleading” claims about school funding.

The latest analysis draws on recently released figures for actual school funding – rather than government estimates – as well as government data on school costs, which have been published for the first time and are rising faster than inflation.

Geoff Barton, general secretary of the Association of School and College Leaders, said: “The reality of budget cuts is that schools have to operate with reduced staffing and this impacts on educational provision, such as less additional support for children and fewer curriculum choices.

“Schools are in the invidious position of having to decide on the least-worst option of where to make cuts or they will become insolvent.”

The government insists it has protected the core schools budget overall in real terms since 2010, and put an additional £1.3bn into core schools funding for 2018-19 and 2019-20, but rising costs are outstripping investment.

Kevin Courtney, joint general secretary of the National Education Union, said the situation was “intolerable”. “There needs to be a reversal of cuts to school budgets since 2010, and for the funding of schools and special educational needs and disabilities provision to be of a level that ensures all children and young people get the education they deserve,” he said.

This month the education secretary, Damian Hinds, told headteachers he had heard their concerns over funding loud and clear and pledged to make the strongest possible case for education to win more funding from the Treasury in the upcoming spending review.