As his two dogs wander in and out of the kitchen, David Breakspear expounds on the problems of British prisons: overcrowding, staff shortages, mental health issues. Breakspear has spent 15 years in jail. His final stint, he says, for holding up a newsagent at knife point, was deliberate – he hoped a few years behind bars could break a cycle of underachievement and homelessness.

Once convicted, he spent his time taking courses and working up to an access module through the Open University. After his release in 2017, this turned into a degree course and a career writing about and advocating for prison reform. Though Breakspear, 49, doesn’t encourage deliberate criminality, he attributes his position now to his time inside. He says: “Education has to be the foundation for any prison reform. It has to be the base, because it’s important.”

The Ministry of Justice has tried to adopt the idea that prisons should focus on education. Last May, the justice secretary, David Gauke, said the government’s vision was to “put offenders on a path to employment as soon as they set foot in prison”, and that “within the prison walls, it starts with education”.

Number of parents fined for term-time holidays at record level

A central part of this vision involves transferring responsibility for prison education in England to individual prison governors from 1 April. Many with first-hand experience of the system, though, believe governor autonomy will do little to increase the chances of prisoner succeeding.

The government’s strategy is guided by a 2016 report by Dame Sally Coates, which drew three main conclusions. First, education in prison should improve the wellbeing of prisoners and increase their employment prospects. Second, it would reduce reoffending and make communities safer. Finally, the present prison education system is inadequate for these purposes.

The forthcoming changes will end Offender Learning and Skills Service contracts, which had provided prison education since 2006. The contracts attempted to replicate further education colleges in a prison environment. These, says Rod Clark, of the Prisoners’ Education Trust, were not “tailored towards the particular circumstances of a prison situation”, as they were set centrally with little heed to prisoners’ individual needs.

The idea behind transferring education to governors is similar to the theory behind converting schools into academies. Just as it was hoped that individual schools could tailor education to their specific circumstances, prison governors are thought to best understand the needs of their prisoners, as well as local employment opportunities.

The campaigning group the Prison Reform Trust estimates that 54% of people entering prison have the literacy skills expected of an average 11-year-old. In an attempt to maintain consistent standards, a new Prison Education Framework demands that every prisoner’s education is assessed when they are admitted, and that mandatory education in maths, English and ICT is provided to those below level 1. This “core curriculum” will be delivered by the four existing education providers – Novus, Milton Keynes College, PeoplePlus and Weston College.

The Prisoners’ Education Trust predicts that the core curriculum will absorb the bulk of governors’ education budgets. Breakspear worries that while basic education is important, it does not realistically improve job prospects. He says: “If you’re trying to get employment with a criminal record, you can’t really have lower than a level 3.” 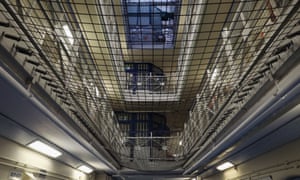 Overcrowding, staff turnover and the frequency with which prisoners are confined to their cells jeopardises even the most basic education provision. Photograph: Dan Kitwood/PA

Individual governors will, however, have more say over how the remainder of their education budget is spent, and can choose courses from a range of providers. Ideally, these would provide skills wanted by prisoners, potential employers, or both.

However, overcrowding, high staff turnover and the frequency with which prisoners are confined to their cells because of violence jeopardises even the most basic education provision.

One worker with experience in the prison system says prisons “don’t physically have the capacity to educate properly at the moment. So it’s either done on a first-come, first-served basis, or on the basis that the lucky get a chance”.

In prison, education is a route to self-respect

Mark Humphries, 51, is another former prisoner who began an Open University course in jail, for arson. He is about to start a job with Wayout TV, a programme established by the education provider PeoplePlus to deliver educational content through televisions in cells.

He believes separating numeracy and literacy from vocational skills is counterproductive. “Most prisoners have negative experiences of school and won’t want to turn up and sit in a classroom,” he says. A better option, he thinks, would be to embed basic education in vocational learning. “Put them in a road maintenance or a retail workshop that requires coursework, so it is like learning by stealth while acquiring a skill.”

Another issue is the extent to which prisoners are moved between institutions. Between July and September, more than a quarter of inmates were transferred, and education records often did not move with them, so they had to start again. The new policy stipulates that each prisoner is given an individual learning plan that is regularly updated and transferable, but it is unclear what mechanisms have been set in place to ensure this.

What book would you send to a prisoner?

Most prisoners, too, seem unaware of the opportunities available. Those who have succeeded in pursuing education are the ones who feel able to push through layers of bureaucracy, such as applying for funding to study degree courses.

Ola Daniel, 52, who worked in the legal profession and was convicted of conspiracy after her clients were implicated in mortgage fraud, took multiple courses in prison but says she had to fight to do so. She worries that many prisoners believe education opportunities don’t include them.

This is where former prison learners can pass on their knowledge and experience. Marie-Claire O’Brien, 38, who was jailed for causing death by dangerous driving, established the New Leaf Initiative to provide workshops and rehabilitation support.

“To me, education is the only real form of social mobility,” she says. She says prisoners respond positively to opportunities delivered by ex-offenders because they can relate to them and the education offered can feel achievable. For governors, such initiatives might be an answer.