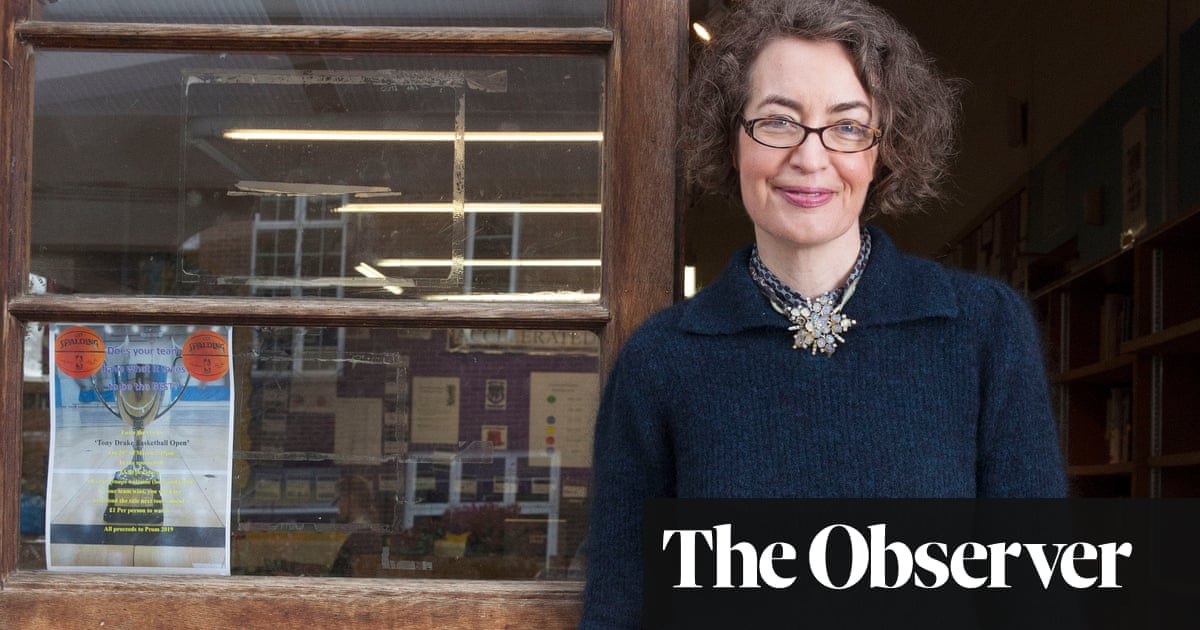 Kate Clanchy is an award-winning poet, novelist, non-fiction writer and teacher. She is writer-in-residence at Oxford Spires Academy, a small comprehensive where the children speak 30 languages. Her recent anthology, England: Poems from a School, showcased the work of her students to great acclaim. Her new book, Some Kids I Taught and What They Taught Me (Picador) looks back over her 30-year career in teaching.

Your school has turned itself around during the decade you have worked there, from the most under-subscribed school in your area to one of the most sought-after. How big a role did poetry play in that change?
There are lots of reasons for the school’s success but poetry is definitely one of them. It’s the cups principle: the more cups you win, the better you feel. And we keep winning poetry prizes at national level, which is great for everyone. We have built up a culture of success and confidence around poetry. Normally, the head boy of a school would be captain of the rugby team but our head boy, Mukahang Limbu, is captain of the poetry team.

Do you feel you are swimming against the tide?
There are a lot of voices at the moment saying you shouldn’t teach kids to write creatively; or, to do almost anything creative, you’re wasting their time, you should be reaching towards exams. But I think that when you are at school you should be able to paint a picture, write a poem, do a bit of dancing. And the prevailing approach to teaching English, which favours criticism and analysis over writing and reading, has had so many toxic effects in schools, one of which is to cut down the percentage of pupils continuing with English after the age of 16 to less than 15 per cent. That is a tragedy.

How Training Just for Dads Helps The Whole Family

What inspired you to write about your experiences as a teacher?
It is a project I have been working on for a long time. There are stories in the book that I have been telling and keeping in journals for literally 30 years. I was waiting for the right moment to publish them and it feels to me like it might have arrived. I was amazed what a chord England: Poems from a School hit when it came out last year, and that so many people wanted to read that book and hear that voice. I think it is because it is quite a hopeful voice.

How did the success of the book go down at the school?
It boosted the whole school. The children were very proud. A lot of them told me it makes you feel important, it makes you feel heard, it makes you feel that you’re somebody – and I think that’s the best and most important thing it did. I tweet poems regularly and when I show a child that I have put their poem on Twitter and five people, including a poet and a professor, have liked it or commented on it, that is huge for them. It makes them feel special and it certainly makes them work harder because they really feel there is a point to what they are doing.

'Far too many are struggling': are universities failing autistic students?

It is so interesting how the children in your school and in your book are so reverent about poetry. Is that down to you?
It’s part of being a multicultural community. There are a lot of pupils who come from places where poetry is really valued. For most Arab kids, most Syrian kids, poetry is really important. It is huge in their culture and it is really big on the internet for the diaspora. That’s also true for a lot of Farsi speakers and Dari speakers from Afghanistan. And it’s not just the EAL [English as an additional language] kids. I have inclusion groups for low-achieving white kids and it can be just as powerful and important for them. Poetry is having a good moment. Things like Button Poetry [an American promoter of Slam poetry] and poetry on the web – they genuinely like that, and if they can see themselves reflected in the poems they read, they love it.

Arts education should not be a luxury, says Julie Hesmondhalgh

Did you always want to be a poet?
No, it never occurred to me that I was going to be allowed to be such a thing.

Why was that?
I didn’t think a woman would be allowed to do it.

But you studied English at Oxford …
I did Sylvia Plath so I thought poetry made you unwell. Really, I’m not joking. She was the only female poet on the curriculum, and there was that thing back then that, if you are a woman poet, you must be writing about madness. And I never really loved Sylvia Plath. I thought she was interesting and a good poet but I didn’t get that ‘Oh, you-are-like-me feeling’. It wasn’t until I started teaching Carol Ann Duffy that I thought poetry might be something I could do. I found her absolutely revelatory. And then I found a whole load of other women poets, like Sharon Olds and Selima Hill, and I thought, right, off I go. Here was somebody who was writing about me. And, in a way, I am repeating that for my students. I am saying, look, here are people like you writing about your lives. I don’t think you can exaggerate the importance of that.

High School Vape Culture Can Be Almost As Hard To Shake As Addiction, Teens Say

There is a valedictory feel to the book. Is it a farewell of sorts to teaching?
Not at all. If I could, I would be in a school for ever and ever. I never get tired of the kids. I get jaded by other things about being a teacher but not of the process of sitting down with some kids in a room and saying, “Let’s look at a poem.” There’s always something new to show them, there is always a new poem they’ve discovered and they are so quick and so flexible and so funny. If I were ever to make a change, I am interested in moving on to teaching teachers, passing on the practice a little bit.

In the book, you write that “shockwaves rocked your primary school community” when you decided to send your eldest son to Oxford Spires Academy at a time when it was “epically undersubscribed” and the last choice for most parents. You learned later that no one talked about anything else in the playground for a full three weeks. Did you make the right decision?
Without a doubt. The younger ones are still at OSA and thriving. The eldest seems to have turned out just fine. He got 12 A*s at GCSE, 4 at A level, and is at Oxford studying PPE. When something happens like the mosque shooting in Christchurch, it reminds me that it is so important to educate kids from different backgrounds together. My sons were out on the climate change march recently with their classmates who come from all over the world, and that is a beautiful, bonding thing.