A French-style cap on the length of the working week has been rejected by a study, commissioned by the Labour party, into ways of giving employees more leisure time.

The report, by the cross-bench peer Robert Skidelsky, found a blanket limit on working hours was unrealistic and undesirable, and instead proposed a sector-by-sector approach.

John McDonnell, the shadow chancellor, who asked Skidelsky to look into the feasibility of legislation to limit work hours, said he would make use of the report to formulate Labour policy.

“Something is very wrong with how the world of work has changed in recent years,” McDonnell said.

“Millions are working long hours while others can’t get the security of the regular hours they need to get by. I’d like to thank Lord Skidelsky for his meticulously researched report which we will study and draw on when looking at how we can reduce the typical working week without loss of pay.”

The report notes full-time workers in the UK, who make up 74% of the workforce, work longer hours than in any EU country, barring Greece and Austria.

However, it said a legislated, economy-wide limit, as the French imposed in 1998 with laws capping the working week at 35 hours, should not be replicated in the UK.

“Capping working hours nationwide, on the lines of France’s 35-hour working week, is not realistic or even desirable, because any cap needs to be adapted to the needs of different sectors.

“The evidence is that, after a brief impact effect, France’s legislation was rendered broadly ineffective by an accumulation of exceptions and loopholes.”

Instead, the report said a general reduction in working hours should be the culmination of other policies and changes, with the state having a crucial role to play in hours-reduction policy as an employer and investor.

“Social attitudes support a piecemeal rather than a one-size-fits-all approach. Recent evidence gathered by Unite the Union has found that UK employees, whilst welcoming the goal of shorter hours, want the specifics of working time reduction to be decided on a sectoral level.” 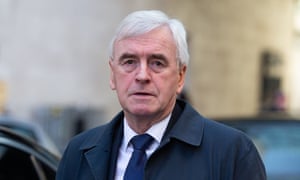 John McDonnell, the shadow chancellor, says Labour will draw on the report to look at reducing working hours without loss of pay. Photograph: Mark Thomas/Rex/Shutterstock

It said rising productivity was the key to shorter working hours because greater efficiency made it possible to produce the same amount of goods in less time. Most of these previous gains had been in manufacturing and extractive industries, and were more difficult to achieve in an economy increasingly dominated by the service sector.

“Productivity gains in large sections of the service sector are harder to achieve than in manufacturing and may not always be desirable anyway.”

Skidelsky’s report said the state should take the lead in moving the economy towards shorter working hours.

“There are three things it can do directly: abolish unemployment, invest in the public sector and use public procurement policies to leverage conditions of employment in the private sector.”

The report said the state could bring about full employment by acting as “employer of last resort” with a job guarantee programme.

Pressure from below for a shorter working week would not be sufficient due to the weakening of trade unions. New partnership bodies would need to be created to fill the gap left by the absence of collective bargaining.

The report said: “At present, the rules governing employment are largely set by financial logic. This is inimical to a civilised reduction in hours. There is therefore a strong argument for setting up countervailing institutions to ‘nudge’ society in a direction which science and technology makes possible, and which is also desired by most people. A balance will need to be struck between what workers want from employment and what employers can afford to give.”