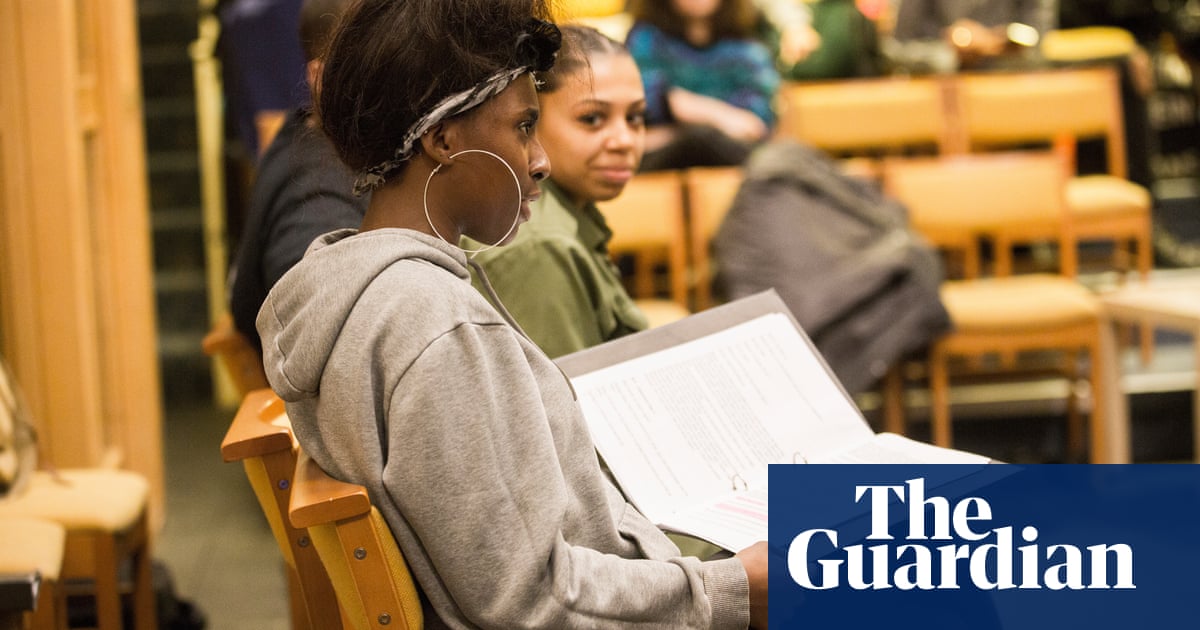 In a Victorian Gothic church behind Harrods in west London, a group of young people from troubled backgrounds have gathered to rehearse a play about school.

Excluded is a new production, set in a turbulent GCSE class in a London secondary school in 2019, that attempts to shine a light on the problems faced by vulnerable young people within the education system.

The content of the play is close to home. At an early workshop exploring the issues, it emerged that all but two of the young performers had been excluded from school. Some are care leavers, some have mental health problems, others have been young offenders. Many have been affected by the consequences of knife crime, which they link to the increasing number of exclusions.

“All the people who got locked out of education either got into drugs or into knife crime,” said 18-year-old Ilani Marriott-Lodge, who was herself excluded from classes in year 11 and put in isolation after she dyed her hair blonde.

School funding crisis in blamed for surge in supersized classes

“The rules were so insane.” She was forced to sit her exams on her own, and was then kicked out of college. “I felt like I had let my mum down,” she said.

Some said they felt let down by the education system, which failed to listen or understand their needs. “I used to get myself in trouble a lot,” said 19-year-old Rakiya Hasan, who was excluded but fought her way back into education and is now at university. Others she knows have not been so lucky.

“Once the system gives up on the student, that student is very, very vulnerable. Seeing it first-hand, people being stabbed and killed, people turning to drugs, it really breaks my heart when I hear some young person has been permanently excluded. It’s a very slim chance someone can come back from exclusion.”

The play is being put on by Intermission Youth Theatre (IYT), which uses drama to engage disadvantaged and alienated young people and is supported by patrons Naomie Harris and Mark Rylance. A 10-month drama programme culminates in a four-week run of Excluded, starting on 6 November, at the company’s base at St Saviour’s church in Walton Place.

“The cruelty of exclusion happens for many reasons,” said Rylance. “We have young people who are excluded from school, from family, from community, from themselves. Youth who need a mission to integrate themselves in a community by developing trust, expression and creative imagination and hopefully friendship through theatre-making.”

It’s a transformative experience for the young people involved. At a Monday night rehearsal, the mood is warm and good-humoured. Everyone is greeted with a hug; the performers throw themselves into their roles and enjoy making each other laugh. It feels like a really fun English lesson.

Is it possible to work 22-hour days? Danielle Steel says it is the secret of her success

The play was written by Intermission’s artistic director Darren Raymond, who fell in love with drama – and Shakespeare in particular – while serving a three-year prison sentence. His previous works include an updated version of Othello set against a backdrop of urban violence. Like his proteges, he felt excluded by school and ended up bunking off to sell drugs.

“School is an important chapter that shapes all of our lives,” said Raymond. “With a record number of teachers leaving the profession, the exclusion of the arts in the curriculum and high levels of student exclusions, some would argue that education is in a state of crisis.

“It’s dangerous. The consequences are the things we are seeing now – young people out of control on the streets, and prepared to do anything without thinking of the consequences of their actions.”

Raymond’s play transports some of Shakespeare’s best known characters into the contemporary classroom. Hamlet’s father has died and his mental health is fragile, which leads to outbursts in class; Macbeth meanwhile has been permanently excluded for fighting and gets involved in county lines.

Moving out of your student flat? Beware the small print

“I know people who have been permanently excluded from school and they found themselves down that path,” said 21-year-old Kai Mason. “In 2016 my friend was murdered. He was excluded from school. He didn’t have anything to do.” Mason spent much of year 11 in an isolation booth at school. “It felt like the day went on forever.

“I tried my best to be a good kid. I always seemed to end up in a situation where I was in trouble.” When his friend died he was left depressed and suicidal. Now, he’s planning to go to drama school.

Marriott-Lodge is also planning a career in acting and already has a number of stage appearances under her belt. “I’m so lucky. The amount of crap, the gang rubbish I’ve been through, I should be dead now.”

“I attended two funerals in the beginning of 2019 because of knife crime,” said Hasan. “It was so emotional. It doesn’t have to happen.”

She added that if more money was put into projects like Intermission, more lives could be turned around. “In Intermission they look at us as aspiring creatives. They really listen to what we want to do.

“Every kid, even those ones that are excluded, they are good kids, but they are misunderstood. At the end of the day, this is the future. You are letting a lot of talent, and a lot of brain, and a lot of ideas go to waste if you let these students go.”