A class of 10-year-olds are sitting on the carpet looking at their teacher with open mouths. Their faces say: outrage.

Their teacher, Rosemary O’Brien, has put up a statement on the board – a real one, by the Football Association in 1921. Football is “quite unsuitable for females”, it says. Across the classroom, pupils are voicing their disagreement.

“That’s completely untrue,” says one boy assertively. A girl speaks up too: “Women should be allowed to play. Like men, they should have football clubs and be famous and do whatever they want,” she says.

An experiment in this school over the past year has conspicuously transformed the way pupils and teachers think about males and females and their roles, as documented in a report to be published this week.

Children here at Torriano primary, and four other schools in Camden, north London, now have the confidence to speak out about gender inequality, the report – due for publication tomorrow – says. Friendships between boys and girls have improved, based on a sense that they have a lot in common. There has also been a clear reduction of stereotypical attitudes.

It is not only among pupils but staff, too. One teacher, Jack Holmes, noticed he was talking to girls in a softer tone than to boys. “I realised I didn’t need to do that.” He started to “hear” when girls were addressed as “my love” or “darling” by staff. “It now stands out to me. I don’t think we do that any more.” He says the programme has made him and other male staff more aware of how they came across to female colleagues. “You question your own stereotyping, your own role.”

So what have teachers done to change? For the past year, these five schools have been participating in the pilot of a programme created and run by a non-profit organisation, Lifting Limits, which encouraged school staff to analyse every little thing they did in the classroom through a “gender equality” lens. 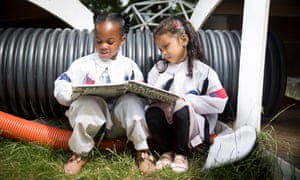 Girls being astronauts – but at the start of the year two-thirds of the pupils who wanted to work in science-related jobs were boys. Photograph: Alicia Canter/The Guardian

An initial audit found many worrying signs. Some teachers were unconsciously conveying sexist messages by telling pupils: “man up”, or saying: “hi guys”, or “you look smart today, did your mummy get you dressed?” or “I need a big strong boy to help me move this”.

Children showed similar sexism in their language (“you throw like a girl!”) and wrote stories about dinosaurs that were nearly all male.

There were displays in school about “mankind” and exhibits of work exclusively celebrating famous men, as well as lessons about inventors, artists and explorers that were very male-dominated. Some of the books used to teach children to read were full of old-fashioned sexist stereotypes such as “the fireman put up the ladder for dad”. In one library, astonishingly, a book about war was labelled “for boys”.

School trousers or skirts for all: ‘Children should experience equality’

At the start of the process, approximately two-thirds of the pupils who wanted to work in science-related jobs were boys, while at least 75% of those who wanted to work in nurturing roles – as a vet or a teacher – were girls. By the end of the year, equal numbers of male and female pupils wanted to be scientists. Substantially more girls felt they could be police officers and footballers, and the proportion of boys who said they could be teachers increased from 24% to 42%.

Are you a teacher who has left the UK to work abroad?

Early years pupils were about twice as likely to say a nurse, cleaner, builder and doctor are “for everyone”. Nearly twice as many children in years 1 and 2 said dolls were “for everyone”. When asked at the end of the pilot what was difficult about being female, 21% of children referred to aspects of gender inequality, compared with just 8% at the beginning.

To make it all happen, a senior teacher was appointed in each school as a “gender champion” to oversee the programme. As well as discussion cards and resources for assemblies and parent workshops, lesson plans were provided: in maths, children were asked to compare data about the number of female MPs, while in geography, they discussed who could be an explorer and why.

O’Brien says it has changed the way she teaches: “When we look at our curriculum, we now think: what female examples could we give?” New books were bought that subvert sexist stereotypes and the traditional male and female roles in fairy tales have been challenged in class discussions. 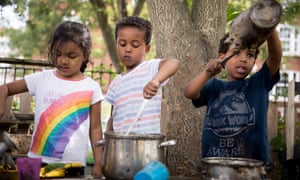 Cooking is for both boys and girls. Photograph: Alicia Canter/The Guardian

Torriano’s headteacher, Helen Bruckdorfer, says the pilot made her reflect on her own attitudes. “I’m thinking about putting in place a gender-blind recruitment practice,” she says. “I’m also considering ways I can support staff to work flexibly.”

The programme is being rolled out to 13 more schools this academic year and Caren Gestetner, the founder of Lifting Limits, hopes one day to offer it to every school in the country. They can get in touch via the website, liftinglimits.org.uk.“We’re particularly keen to work with networks of schools, local authorities and multi-academy trusts,” she says. The only thing holding her back is funding. “We’ve got a bit of money from the National Lottery funding scheme. But to be sustainable, we need more.”

Back at Torriano, Tina, who is 11 and wears a hijab, is talking about how much she loves playing football. “I really want to be prime minister one day, so I can speak about how we can all be equal.”

Her friend Parsa, 11, is growing his hair long for charity. “Outside of school, people have made unkind remarks. But I brush it off because of what I’ve learned at school. Although I might look like a girl to them, I know there’s no reason why I shouldn’t have long hair.” He wants to be an astrophysicist.

John, aged 10, wears make-up sometimes and wants to become a dancer. Over the past year, he has gained confidence to be himself, he says. “Gender shouldn’t affect your life in any way. There shouldn’t be any boundaries for women or men. We should be able to do what we want, as equals.”

The transformation has been astonishing. “To hear children going: ‘that’s not fair’ is fantastic,” says O’Brien. Often, her young pupils cannot see why people of different sexes are treated differently. “It gives you hope.”